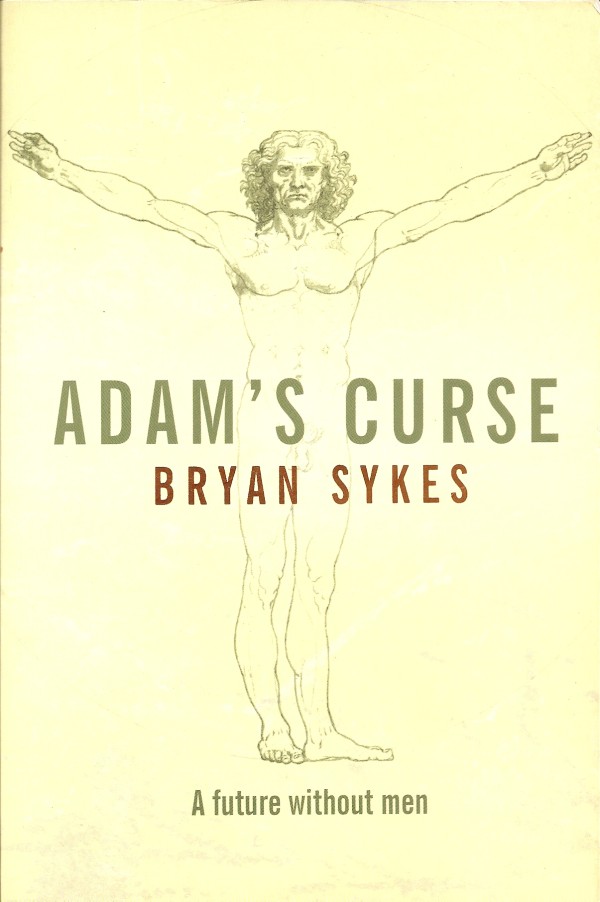 Bryan Sykes is a Professor of Human Genetics at Oxford University. He describes a kind of  ‘odyssey’ into the scientific understanding into human genetics and eventually into the Y chromosome. It begins with studying the Y chromosomes of the men who share his surname in northern England. It is in fact quite interesting and readable due to his writing style and his ability to convert the science into something the intelligent layperson can understand.

The book is held together by a dual narrative. One where modern understanding of human genetics unfolds, and the other where differences in the behaviour of men and women in human history, particularly conflict between the sexes, and between males, is described as a consequence of genetic conflict between the sexes.  He describes the evolutionary advantage of sexual reproduction but the non necessity for many species to use the Y chromosome to code for the male phenotype in sexual reproduction. He describes the the paleogenetic necessity for non-transmission of male cytoplamic genetic material in sexual reproduction – this means that all people only receive their mother’s cytoplasmic genes. Sykes documents examples where female genomes code for the destruction of male offspring and evidence for decreased male fertility.

The final conclusion of this book is that due to the accumulation of ‘junk’ in the ‘intrinsically unstable’ Y chromosome and the availability of sophisticated Genetic manipulation through modern medicine, it is possible that females will be able to reproduce in the future without men. He isn’t particularly concerned since his thesis seems to include the notion that males are essentially modified females and are responsible for violent competition under the influence of their Y chromosome. It’s extinction may result in a better world.

His genetic argument for homosexuality fails for me for 3 reasons. Firstly he fails to identify the presumed genetic cause for homosexuality. Secondly, he inconsistently treats ‘genetically determined’ homosexuality as a  as an acceptable behaviour whereas he condemns ‘genetically determined’ ‘male’ aggression and greed. This smacks of political correctness rather than scientific analysis. Thirdly, the acceptance of genetic determinism in behaviour fails to accept the incredible non-genetic influences to human behaviour that identify us as human from a Christian viewpoint.

One of the other fascinating failures of Sykes argument is his insistence that human behaviours, such as altruism, which are counter-intuitive to a notion genetic propagation of individuals in a competition for survival and propagation of their genes, are actually sufficiently explained simply by genetics. From a Christian viewpoint it seems to me that if he had an opinion consistent with his thesis of genetically determined altruism, Sykes would find it difficult to explain genetically why Jesus died in the place of sinful human beings despite having no other ‘genetic’ copies of his Y chromosome in existence.

Regarding Adam’s Curse by Bryan Sykes.

It would appear that essentially he holds to a materialistic and naturalistic perspective of human behaviour and morality, that is, homosexuality and altruism are ultimately determined by genetics. To what extent does he attribute human behaviour and cognition to genetic determinism?
Like Sykes, it is a common naturalistic position (i.e. Darwinian evolution) to view morality as a means to enable survival or flourishing of the species. Many atheists therefore hold to this position:

The position of the modern evolutionist . . . is that humans have an awareness of morality . . . because such an awareness is of biological worth.  Morality is a biological adaptation no less than are hands and feet and teeth . . . . Considered as a rationally justifiable set of claims about an objective something, ethics is illusory.  I appreciate that when somebody says ‘Love they neighbor as thyself,’ they think they are referring above and beyond themselves . . . . Nevertheless, . . . such reference is truly without foundation.  Morality is just an aid to survival and reproduction, . . . and any deeper meaning is illusory   . . .
Michael Ruse, (Philosophy of Science, University of Florida) “Evolutionary Theory and Christian Ethics,” in The Darwinian Paradigm (London: Routledge, 1989)

Let me summarize my views on what modern evolutionary biology tells us loud and clear … There are no gods, no purposes, no goal-directed forces of any kind. There is no life after death. When I die, I am absolutely certain that I am going to be dead. That’s the end for me. There is no ultimate foundation for ethics, no ultimate meaning to life, and no free will for humans, either.
William Provine, (University Professor at Cornell University and is a professor in the Departments of History, Science and Technology Studies, and Ecology and Evolutionary Biology) Origins Research 16(1), p.9, 1994

In a universe of blind physical forces and genetic replication, some people are going to get hurt, other people are going to get lucky, and you won’t find any rhyme or reason in it, or any justice. The universe that we observe has precisely the properties we should expect if there is, at bottom, no design, no purpose, no evil and no good, nothing but blind, pitiless indifference. … DNA neither knows nor cares. DNA just is. And we dance to its music.
Richard Dawkins, River Out of Eden, 1995

In the natural world, animals don’t rape, steal or murder. When a stallion forcibly copulates with a mare, it does not ‘rape’ the mare. When a crocodile preys on a duckling, it does not ‘murder’ the duckling or commit infanticide. As advanced primates, we are no different in this regard to other animals – for the naturalist, to set a different standard for homo sapiens is to be guilty of species-ism. In a world where God does not exist, there is no rational reason to think that objective moral values exist. Objective moral values those injunctions that are valid and binding whether one believes in them or not. So that even if the Nazis, had won WWII and managed to exterminate all persons of non-Arian descent and they exterminated all those who opposed their worldview, their actions would still be considered to be immoral.
It is enlightening that prominent atheists have opined that objective moral values should find their basis in God:

Moral properties constitute so odd a cluster of properties and relations that they are most unlikely to have arisen in the ordinary course of events without an all-powerful god to create them.
J.L. Mackie, Ethics: Inventing Right and Wrong, 1977

The central question about moral and ethical principles concerns their ontological foundation. If they are neither derived from god nor anchored in some transcendent ground, are they purely ephemeral?
Paul Kurtz, (Professor Emeritus of Philosophy, State University of New York at Buffalo), Forbidden Fruit, 1988

Both atheists and theists agree that without God, there is no reason to suppose that objective moral values should exist. Sam Harris, a neuroscientist, has recognised the untenable position of his atheistic predecessors and contemporaries who held to moral relativism – Harris affirms that objective moral values do exist. Actions such a rape, child abuse, torture, genocide and murder are moral abominations.

It is safe to say that … the most moral response — is not to throw battery acid in the faces of little girls for the crime of learning to read. This may seem like common sense to us — and it is — … the Taliban are wrong about morality. In fact, we must say this, the moment we admit that we know anything at all about human well-being.
Sam Harris, http://www.samharris.org/site/full_text/the-moral-landscape-q-a-with-sam-harris/

The man who says that it is morally acceptable to rape little children is just as mistaken as the man who says, 2+2=5.
Michael Ruse, (Philosophy of Science, University of Florida), Darwinism Defended (London: Addison-Wesley, 1982)

It appears that Bryan Sykes wishes to affirm moral relativism on the basis of genetic determinism, including moral virtues such as altruism as ultimately being an aid to survival. In this respect, he affirms that without God there are no objective moral values (premise 1). As you have stated in your review, he wishes also to condemn male aggression and greed (premise 2) despite genetic determinism. Unwittingly, Sykes affirms the existence of God and he therefore fails in his attempt to ground morality in genetics.

I really appreciate this Post aristotleO. It seems to me that it is a very good thing for scientists like Sykes to ask the question “Could all this be explainable by genetics?”. That is the essence of the rational mind that looks to understand things, not simply to accept them, but perhaps to use them to make things better. I think that is what the Greeks gave us which is one of the core foundations of Western Civilization and it’s technological scientific distinctives compared to other civilizations. However, that approach by Sykes can make the rational scientific explanation become a sort of ‘God of the scientific gaps’ and miss the very rational argument that you have provided in your Post. Sykes is almost mystical whereas your argument is very refreshing, convincing and rational. I thank you.