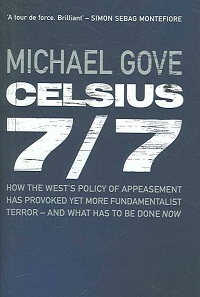 Essentially, in this book Michael Grove looks at the ideology of Islamism. In doing so, Grove has provoked the chagrin of the defenders of the cultural left defending his political opponents and his challenge to the misanthropy that characterises much Western liberal humanism in the twenty-first century.

After two decades of ‘political correctness’ feeding the Western population regarding Islamism, Michael Grove has done a service in writing this book by  analysing the effect of the appeasement of militant Islam. Western history has taught us that appeasing totalitarian ideology eventually leads to catastrophe and incredible human suffering1.

The effect of this appeasement is being played out in the world today, and Western populations are essentially being told that this is the new ‘normal’. ‘Suck it up’ and trust increasing surveillance by Western governments who demonstrably cannot protect their populations, even from internal Islamist radicalisation. Surprisingly, Grove has done us a service even though he is an ex-politician.

Grove argues that Islamism is not an inherent part of Islam. So he distinguishes between “the great historical faith” of Islam which he writes has “brought spiritual nourishment to millions“, and Islamism, a “totalitarian ideology” which turns to “hellish violence and oppression” in a similar way to the 20th century ideologies of National Socialism and Communism 2.

Grove focuses on fighting Islamist ideology which he posits is a totalitarian political addition to the religion of Islam. Islamism argues it is the responsibility of muslims around the world to create an Islamic political unity, for example an Islamic State or Caliphate, which is characterised by the universal implementation of Sharia law on the worlds population, beginning with traditional geographical locations of Islamic religion, then the remainder of the world. this is the Islamist’s realm of warfare, expresssed as violent jihad against anyone who resists the imposition of sharia and a totalitarian Islamic theocracy.

He argues at it’s core is a “dark hatred” of alternative ideologies which are likely to resist. In particular, there is a hatred of Christianity, Judaism, liberal humanism, Western values and especially Western notions of free thought and freedom per se.

Though it may be inspired by some more extreme Islamic traditions, he sees it as a relatively recent twentieth century innovation which is expressed, for example, in Saudi wahabbism. Though there were frequent currents in Islam which have been violent and extreme in the past, Grove sees the period between 1930and 1970 as crucial for the development of Islamism. Grove argues that Islamism is a reponse to a perception during that time that Islam is in decline. The reason for this is that it is not sufficiently strict and pure.

Essentially, Islamists seek to recover the position that Islam had in parts of the world over a thousand years ago, initially in traditional lands but ultimately, via the duty of every muslim in their society to impose sharia law, to impose it across the world. The essence of the strategy of Islamist ideology is propaganda and violence. And everyone suffers, both muslims and non-muslims.