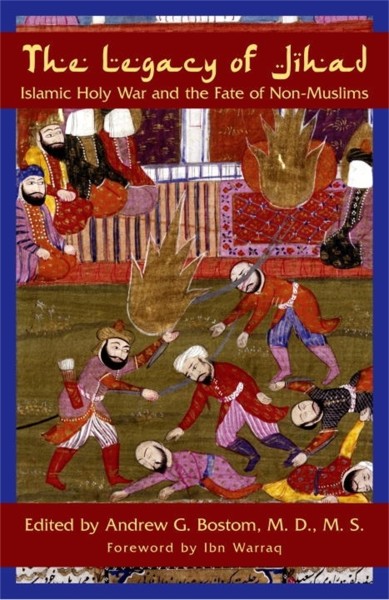 The Legacy of Jihad : Islamic Holy War and the Fate of Non-Muslims

This book originally published in hard-cover but now in paperback too is quite large. Andrew G. Bostom is actually an associate professor of medicine at Rhode Island Hospital. His work in this book is scholarly and thorough. He compiles a large number of documents, translated from reliable source documents, regarding Islamic Jihad. Many of these are primary sources. He has also included more obscure secondary sources, particularly from French authors.

He does not appear concerned with ‘political-correctness’. In fact he hopes that one day his descendants will “thrive in a world where the devastating institution of jihad has been acknowledged, renounced, dismantled, and relegated forever to the dustbin of history by Muslims themselves.”

He has completed an enormous task in this book. There is an excellent overview of the institution of jihad in Islam which is followed by an extensive collection of writings. The book provides a textual analysis of the concept and practice of jihad by examining Islamic theological and legal texts, eyewitness historical accounts of Muslim and non-Muslim chroniclers, and essays by scholars analyzing jihad – “war against unbelievers in the path of Allah” – and the conditions imposed upon the non-Muslim peoples conquered by jihad campaigns.

Bostom’s systematic analysis clearly demonstrates that historic practise of Islamic jihad is firmly rooted in Islamic jusrisprudence. The historical record, and it’s basis in Islam, does not reveal a benign activity intended for the benefit of all people. Islamic jihad is about an intolerant and violent propagation of the Islamic faith and subjugation of resistant populations – massacre, pillage, enslavement and deportation. It is this ‘institution’ of Jihad in the historical practise of Islamic conquerors that has allowed the imposition of their Arab culture upon sophisticated conquered peoples – such as Byzantine Syrians and Persian Sassanids. Though this is in the interests of Islam, it is not in the interests of the rest of the world.

This book shows that the Western liberal romantic acceptance of Islamic jihad as essentially a peaceful and individual devotion is not grounded in historical Islamic practise, nor in it’s long-standing traditional teachings. The ‘first’ jihad is about ‘inner struggle’. But restricting the meaning of jihad to a personal, inner, religious adherence is inconsistent with the other meanings of jihad. It helps understand why despite distaste at the propagation of Islam by the ‘sword’ by many more moderate muslims enjoying freedom and peace in the West, they are unwilling to denounce en-mass the validity of violent jihad, or the inappropriateness of discrimination against subject peoples in Islamic countries.

Bostom argues that jihad as a means of Islamic expansion and conquest is uniquely and historically distinctive in comparison to violent expansions by other groups. He argues there is a unique meaning of jihad to muslims looking back on their history, and that this meaning is violent subjugation. He traces the concept of jihad from the Koran, and shows that historically the predominant understanding of jihad amongst Muslim commentators recorded in the tenth and eleventh centuries did not mean the contemporaneously redefined notions of personal struggle against evil or the non-violent pursuit of a just cause. It has always meant the violent struggle by the entire community against non-Muslims.

There is an argument that the medieval concept of a just war which led to the Christian Crusades against muslims and other ‘infidels’ arose from the Islamic concept of jihad. But this book dispels the view that a ‘just’ war as understood by Europeans to restore the ‘status quo’ based on the Roman Catholic precipitant of a ‘casus belli’ is reflected in the Islamic institution  of jihad. Islamic jihad, from it’s very beginnings, did not recognise any validity in pre-existing ‘status quo’. The only legitimate state is Dar el-Islam, or “the domain of peace” in which muslims dwell under Islamic law. Outside of this is only the “domain of war” where there is no valid non-muslim state. In this sense, the traditional Islamic understanding of jihad justifies transformational revolution – an entirely new order of things.

Historically, jihad has been, with few exceptions, a permanent success. Once Islamic culture sank in, it became virtually impossible for any foreign cultural influence to change it. This distinguishes it’s usefulness from those ephemeral military conquests that, while capturing territory, are unable to capture the hearts and minds of those who have been conquered. Jihad requires conversion.

If a conquered people know that by conversion to the faith of their conquerors they will be able to escape the humiliation of servitude and subjugation, that they will be looked upon as members of the community of the faithful and no longer as infidels, then there will be a powerful incentive to convert. This meant rapid pacification of a conquered people by a swift and easy transition from being outsiders to being insiders — a transition that only required a person to accept the simple principle, “There is no God but Allah, and Mohammed is his Prophet.”

Then there is the institution of  dhimmitude — the policy of offering “special” treatment to those whom Mohammed dubbed Peoples of the Book, i.e., Christians and Jews and, sometimes, Zoroastrians. Bostom shows that while normal pagans were given the choice “convert, or die,” Jews and Christians were offered the choice between conversion to Islam and the acceptance of an inferior status within the community of Muslim believers — a community in which every aspect of the public life of the Jews and Christians was under the control of Islam. Yet, as the Koran itself had commanded, and as the classical Islamic scholars continued to insist, it was not enough that the Jews and Christians within Dar el-Islam accept the cultural hegemony of Islam with their lips and outward behavior — they must, in the words of the Koran, “feel themselves subdued.” Like children brought up as slaves, they must psychologically feel their own helplessness and inferiority.

Islamic hegemony must be made to seem second nature to them, so that they would not think of rebelling but would go about their business resigned to the status quo achieved by Islam. Over time, this psychological submission would become an increasingly unattractive position for those who wished to be free of it — but here again there was a path to liberation from this state of mental dependence and servitude: conversion to Islam.

It is this peculiarity of the institution of jihad which makes it so effective, despite the fanaticism and brutality with which it was systematically carried out. It is the revival of historical jihad which Bostom believes is the essence of radical Islam.

Bostom’s analysis reveals a great deal about the use of jihad in a modern context by radical Islamic groups, such as ISIL in creation of their utopian Islamic society by bloodshed. Jihadists do not see themselves as promoters of alternatives to other religions, but as creators of an entire alternative political system. In the modern context, an alternative to democracy. An Islamic peace is clearly not about ‘peace’. History demonstrates that, at the very least, it is about oppression, exploitation and subjugation of those populations who do not want to be muslims.

Andrew Bostom’s work is not simply a fine scholarly treatise on an old-fashioned institution. It is a pointer to a deeply disturbing ideology espoused today by radical Islamists which threatens the very existence of any non-muslim society, and which is inconsistent with individual freedom.

Read the paper “The Rights of non-Muslims in an Islamic State” by Samuel Shahid.