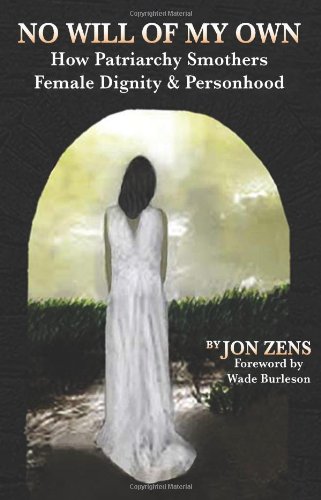 No Will Of My Own:

Religion, not just traditional Christian religion, depicts women as the source of evil because of Eve, and blames them for the lust of their male family members. In Genesis 3 the serpent, not the woman, who was cursed Gen.3:15. And Satan has waged war on man, both male and female, ever since. Historically,  Roman Catholicism and Protestantism taught and practised forms of patriarchy that essentially reflected Satan’s war on females by undermining their dignity and person-hood. Women were not allowed to function or speak in the church, were viewed as conduits of sin and error existing to serve males and bear children. Such traditions, in an extreme form often practised, set up and legitimize the promotion of male superiority and the victimization of girls, the abuse of wives, the loss to all of the benefits from the ministry of women, and protects those who promote such false doctrines, and those who use them to abuse women.

In No Will of My Own, Jon Zens compares the patriarchy taught to families by the Roman Catholic and Dutch Reformed churches in Holland with an aggressive patriarchal wing of the home-schooling movement in America. He exposes the dysfunctional indoctrination received by boys in severe religious homes, giving them airs of superiority and control. In like manner, it points out the physical and psychological programming of females, promoting strict silence, subservience, and ignorance. This is not merely uncomfortable for some women, but toxic and dangerous to all Christian men and women and their local assemblies.

Patriarchy (or matriarchy) is a of manifestation of religion and not of Christ – the only ruler and source of the Christian life. One must not underestimate the task which Jon Zens has undertaken in a small 70-80 page booklet. This is a scathing analysis by a brilliant and deeply pastoral Christian man who has the courage to challenge the exploitation of women in God’s name.

A video review of this book follows and can also be found here.
Do you like this material?