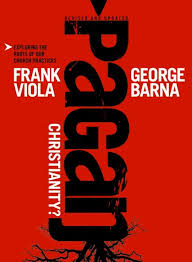 This original version was taken out of print.

This book seeks to outline “The Origins of Our Modern Church Practices” essentially in paganism, not just from the Greco-Roman historical period within which Christianity began, but right through its establishment as the official religion of the Roman Empire, medieval times, the reformation, and subsequent history through to the 20th century. Viola’s treatment of these linkages to paganism is implacable and unrelenting. He approaches the subject systematically and methodically documents their origins. And he goes further because he then describes the danger they pose, and the harm they cause. He doesn’t appear to be making an exhaustive academic study of each practise he denounces, but he does provide enough evidence so that the reader can begin their own personal examination and to justify his viewpoint. He has attracted much criticism from traditional Protestant and Evangelical leaders across the Western world. Unfortunately for much of his critics, Viola’s challenge is valid and that in itself makes the book a good read. Highly recommended.

This book is now revised with George Barna and published by Tyndale. Please visit http://paganchristianity.org

Pagan Christianity – Released in 2008, this evocative title put Viola’s expertise in church history on the grid. Viola teamed up with research heavy-weight George Barna to create a formidable, devastating, prophetically written tour de force on ecclesiology. From the jolting opening to the challenging ending, this is a bittersweet, compelling, and dramatic progression of historical and challenging content. Love it or lump it, you can’t read it and remain settled. This book sparked a revolution that set the stage for Viola’s other groundbreaking works, establishing him as a voice that couldn’t be ignored. Pagan Christianity is milestone of raw passion and energy.

Website with Q & A from the authors and bonuses: http://PaganChristianity.org

Send a review to the editor@thedebriefing.net or post a view on this book here.