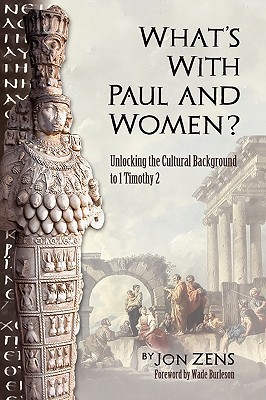 What’s with Paul and Women?

This book is a serious attempt to grapple with the implications of the cultural-religious background of the local Christian church in Ephesus, the words of Paul and their interpretation of 1 Timothy 2:11-12 regarding the ‘roles’ of women and men in the wider Christian church. In fact, Jon Zen’s argues there is a significant misinterpretation of Paul’s statements. He particularly focuses on the cult of Artemis, which saturated the mindset of the Ephesians where Timothy is seeking to resist false teaching (1 Timothy 1:3). And it is to Timothy that Paul writes. Most of the gender argument interpreting such passages revolves around whether Paul’s words can only be applied in the particular context of Ephesus or whether they apply for all time and all local churches. Though there is a ‘foot in both camps approach’, John Zens appears to fall into the former group.

It is important to note that Jon Zen’s appears to have a ‘high’ view of the authority of Scripture. He does not question the integrity, reliability or the nature of the Scriptures as  ‘special’  communication by God to man. Many interpeters who do not wish to apply such passages to women in the churces today often do so by undermining the veracity of Scripture. But not Jon Zens. He approaches the Scriptures as God’s inerrant written word.

Drawing upon his own extensive linguistic research as well as other research and teachings he challenges specific gender theology that has plagued the church in the post-apostolic era when the early church fathers began to supplant the clear example of Jesus and the works of His apostles with pagan philosophical influences. Many commentators have demonstrated how these have destructively perverted the important role of women in the churches. Jon Zens therefore, believes 1 Timothy 2:11-12 has been used inappropriately to silence women in the church for over 1500 years and proceeds to expose the fallacies of this interpretation. Additionally, Jon Zens in his appendices engages with Biblical teaching more widely by going into 1 Corinthians 14:34-36 and also engaging with some modern theological though, particularly arguments by John Piper.

In short, Zens believes the instructions are intended for the local Christian community in Ephesus only in it’s struggle against the Artemis cult. He provides one possible way to understand an alternative to the more common, conservative approach to the chapter in particular, and the question of gender roles more generally. Jon Zen’s courage and scholarship is well worth reading.

Jon Zens explains his position in the following  video