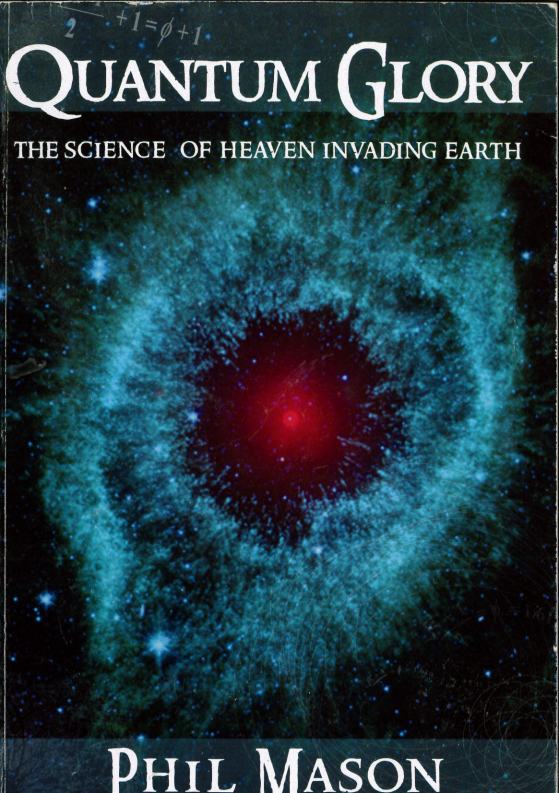 This is an unusual book written by an Australian Theologian committed to impacting the New Age community in Byron Bay NSW with the love and power of Christ. Despite no formal education in science he seems to ‘get it’ because he appears passionately interested in quantum physics, astrophysics and molecular biology. That is, science and theology are complimentary disciplines in understanding God, the universe and humanity – “there is no conflict between true science and theology” (Foreword by Bill Johnson, p 17). It is in two parts : “Mapping” and then “Restructuring” the Quantum Universe.

Mason sets out and expands his view that the science of quantum physics has been “hijacked‘ by New Age teachers to support their belief system. Mason argues that biblical revelation and quantum physics are complimentary and point to a personal God, who sustains the universe and establishes reality, ultimately for the purpose of redemption. He describes the emergence of ‘mystical physicists’ from philosophical ‘metaphysical’ examination of the essence of our reality. Many of these people, such as Fred Alan Wolf or Amit Goswami exhibit a mysticism arising from the New Age movement, or their views are appropriated by the New Age movement and it’s belief system. This is described as ‘Quantum Quackery’ by Victor Senger, a Professor of Physics at the University of Hawai.

Mason touches on the theology of the ‘Uncertainty Principle’ by looking at the relationship between quantum indeterminancy and the omniscience of God. He appears to resolve it by the concurrent qualities of God – His transcendence and His immanence. He moves on to the fundamental mystery of quantum physics – the superimposed wave-particle duality of reality – and identifies the observer effect in the famous double-slit interference experiment.

Time as an illusion

The notion of ‘non-locality‘ is then addressed. This is when something is outside of the time-space continuum, like in a further dimension of reality not bound by either locality or space. Concepts of ‘quantum entanglement‘, or ‘spooky action at a distance‘ (Albert Einstein) demonstrate that quantum particles can be entangled and communicate at speeds infinitely beyond the speed of light. This then leads to ‘quantum tunnelling‘, ‘quantum teleportation‘, and ultimately the possibility that conscious interaction with the quantum world can change it’s reality.

Mason argues that quantum non-locality underlies all miraculous intervention by God in the material. Mason’s conclusion is that based on the physics  “non-local quantum realities are capable of materialising into a localised spatial formation“. But his most astounding analysis is that rather than requiring the mathematical construct of the ‘Multiverse‘, all that is needed to understand this possibility is the existence of God outside his creation, and the existence of the ‘spiritual’ realm separate from the physical reality – both these are fundamental to biblical theology. So to Mason, the quantum world is the interface between these two realms, and therefore exhibits properties of both. Mason rejects modern New Age pantheism which argues that non-locality is ‘spirit (invisible and omnipresent in all) because both are non-material. Modern New Age pantheism concludes that the entire universe is God because the quantum reality is the ‘spiritual’ realm. Biblical revelation places the God outside of created reality – outside of the quantum world, outside the material world, outside the spiritual realm. The spiritual world is separate from the material world and is inhabited by an ‘invisible order of created beings‘. Mason points out that the ‘spiritual realm’ is further divided Biblically into ‘darkness’ and ‘light’ and this realm can ‘intersect with the physical world‘. Unlike the views of some metaphysicists, New Age quantum mystics, and others, science has not discovered the ‘spiritual realm’.

One thing Mason does not make clear is whether the biblical ‘Holy Spirit’ is separate from the ‘spiritual realm’.

Mason makes four very helpful and logical conclusions here. The first is that ‘though quantum non-locality is mysterious, it is not necessarily miraculous‘. The second, is ‘just because something is invisible does not necessarily make something spiritual‘. The third is that the “quantum world is part of the world of nature, part of God’s creation“. Fourthly, he argues that the ‘invisible (quantum) substructure of the universe is intentionally designed by God to be non-local in nature..to allow for …non-local, supernatural intervention from the spiritual world, ….and ‘the direct supernatural intervention by God‘ – it’s creation and it’s sustenance by God’s will. These are consistent with Biblical revelation.

God is described as the ultimate observer who ‘creates‘ by His ‘word‘ (Hebrews 11:3) the ‘materialised universe‘ by observing ‘individual packets of energy that exist in the quantum field‘. This ‘mechanism’ of constant watchfulness is also used by a personal God to care and facilitate grace to individuals in need (Psalm 146:9). He participates in the beauty of the universe (Proverbs 16:4, Genesis 1:4) and the study of the universe demonstrates his glory (Romans 1:18-20) and the correctness of worshipping him (Revelation 4:11).

Though sound is a mechanical wave explained by modern physics, Mason argues this mirrors a deeper non-local, non-mechanical spiritual ‘sound wave’ revealed in the Bible – ‘waves of Spirit upon non-local quanta in the realm of quantum physics” – “the voice of the Lord“. This voice is ‘spiritually’, rather than ‘intellectually,’ discerned’ (1 Corinthians 2:14) using spiritual ears, and plays a role in biblical prophecy.Unlike sound waves which can reconfigure matter, Mason argues these spiritual ‘sound waves’ are creative in their effect on the quantum world.God as an extra-dimensional being intervenes supernaturally to create, recreate, resurrect, cast out demons, heal etc. God’s people, led by the Holy Spirit, can use ‘praise as a weapon of warfare‘, they can use prophetic speech, or music (or presumably prayer).

String theory and the ‘cosmic symphony‘

Quoting Seth Loyd Professor of Mechanical Engineering at MIT who states in his book ‘Programming the Universe’ “The history of the universe is, in effect, a huge and ongoing computation,” Mason argues for ‘Intelligent Design” on the basis that ‘information is always the product of intelligence‘. He quotes Stephen Hawking, Paul Davies, Ian Stewart, John D Barrow, Richard Feynman, Hugh Ross to argue that God is the ultimate mathematician, that in the study of God’s creation we discover deeper mathematics and that unobserved quantum realities (such as wave functions) do have independent existence as mathematical information coded into the most basic fabric of the universe (I think Plato had a similar idea regarding atoms). Science needs to discover what God has placed there and such discovery brings glory to science (Proverbs 25:2, Solomon’s wisdom 1 Kings 4:32,33). Mason quotes Heinz Pagels in ‘The Cosmic Code: Quantum Physics as the Language of Nature’ who states “I think the universe is a message written in a code, and the scientists’ job is to decipher that code.“

“God has not left Himself without testimony” (Acts 14:17)

Mason argues pursuasively that the universe is ‘”laden with metaphysical sign-posts that inexorably point us to the very source of creation itself……so that those with an inquisitive mind may stumble upon the glorious evidences of his intelligent design and turn to him in awe and worship.” He states that New Age metaphysics left in a sort of ‘twilight zone’ where there is consciousness of the mystery, but no understanding of the personal Creator at the centre of it. He quotes the logical conclusion “The fool has said in his heart, ‘There is no God'” (Psalm 14:1).

Here Mason recounts some of his experiences with the love and power of God. He recounts some of the violations of physical laws we read about in Scripture where a transcendent God intervenes supernaturally in his creation. Though the ‘beauty’ of the universe brings glory to God (Ecclesiastes 3:11, Romans 1:20), he argues that the fall of Lucifer introduces ‘ugliness’ to the universe, because of the existence of darkness in the spiritual realm (Ephesians 6:12). Though without the power to create, these dark spiritual forces have the power to manipulate and corrupt matter at a biological level – to destroy (John 10:10). Darkness seeks to destroy beauty through lies, whereas there is “a divine relationship between beauty and truth”. The spirit world can influence the material, but we cannot influence it. So God intervenes by sending Jesus as part of God’s “redemptive plan to beautify the whole of creation once again” (Luke 4:18-19, Isaiah 61:3, Psalm 149:4, Psalm 90:17).

Authority of the Word spoken by Christians

Importance of Intimacy with God

Mason states an important principle – “that Kingdom fruitfulness is proportional to Kingdom intimacy” (John 10:30). This is a love of intimate friendship ‘phileo‘ love rather than ‘agape‘ love (John 5:19-20, John 16:27, John 15:15) a faith energised by love (James 2:23, Galatians 5:6), by a deepening revelation of the Father’s love. Love preceeds authentic faith (1 Corinthians 13:2), faith requires love and hope (1 Corinthians 13:13), and faith grows as a loving intimacy with God grows.

A common Gift of Faith

There is no formula, just intimacy

Magnificently, Mason simply states that “the world is looking for formulas to create their own reality and shape their own destiny.” And Jesus points Christians to intimacy with God rather than magical formulae (John 17:23).

When a threshold is reached God’s glory becomes manifest as the visible ‘presence’ of the LORD, who is otherwise omnipresent (Psalm 139:7-8). This threshold can be crossed when God is sought deeply and genuinely (James 4:8, Jeremiah 29:13, Psalms 63:2, 2 Thessalonians 1:9, Jude 1:24), a distinction existing between the presence of the LORD and the presence of His glory. Crossing the threshold can be a terrifying experience (Revelation 1:17) especially when it involves moving from a subjective presence to an objective physical glory (visible by all). Here the Bible records intensive physical effects (Matthew 17:6, Mark 5:33, Mark 9:20, Luke 17:15-16, John 18:4-6).

So essentially, the thesis here is that “the glory of God is the very substance of the non-local realm of heaven, tangibly manifesting” as smoke, a cloud, visible extra-dimensional light or as supernatural power transforming or re-creating reality via the quantum ‘field’.

When Jesus came the “glory realm of heaven and the quantum realm of matter collided” (John 1:14). He came to reveal God’s glory and pass it on to his followers (John 17:22, 2 Thessalonians 2:14, 2 Corinthians 3:5-4:1). The Holy Spirit therefore, by mediating God’s glory through the quantum realm, equips us for ‘supernatural’ ministry – like Jesus (John 6:63). Like Jesus we are non-locally ‘bilocated’ – both on earth and in heaven.

Mason also distinguishes between the fullness of the Holy Spirit entering believers at conversion edifying them and that which is on them for ministry to others from ‘the overshadowing glory cloud‘. It isn’t really a second blessing theology because from my reading Mason is saying it is there for all believers to access. “Overshadowing” is a key word here though it isn’t clearly the intention of it’s use in Scripture, and Mason uses it to differentiate between ‘internal and external annointing‘.