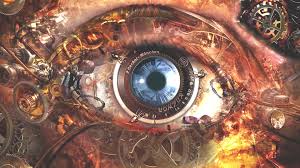 One of the fascinating things about scientific endeavour is the impetus it provides for believing Christians who practise science to recognise the activity of their God in the material universe. It is my view that many things described in the Bible only become understandable if we develop our scientific understanding. Not in the sense of de-mystification which most atheistic scientists pursue, but by shedding light on what was revealed to the writers of scripture which they described in their own way, according to their own cultural, linguistic and educational limitations. One such example is the study of quantum physics, and in particular the famous “Double Slit Interference” experiment, sometimes described as “Young’s” experiment.

At it’s most basic in this experiment, a coherent light source such as a laser beam illuminates a plate pierced by two parallel slits, and the light passing through the slits is observed on a screen behind the plate.

The wave nature of light causes the light waves passing through the two slits to interfere, producing bright and dark bands on the screen ( a combination of constructive and destructive interference) —a result that would not be expected if light consisted of classical particles. That is light is behaving as a wave of energy. However, the light is always found to be absorbed at the screen at discrete points, as individual particles (not waves), the interference pattern appearing via the varying density of these particle hits on the screen.

Furthermore, versions of the experiment that include detectors at the slits find that each detected photon passes through one slit (as would a classical particle), and not through both slits (as would a wave).

So essentially, this experiment demonstrates that a single photon passes through both slits as a wave, unless it is under observation (a detector) in which case it only passes through one slit as a particle. This is a fundamental mystery of quantum physics. Physics students are taught that this demonstrates the principle of wave–particle duality.

Other atomic-scale entities such as electrons are found to exhibit the same behaviour when fired toward a double slit. The largest entities for which the double-slit experiment has been performed were molecules that each comprised 810 atoms (whose total mass was over 10,000 atomic mass units).

Other variations of this experiment involve the use of ‘thought’ or ‘gedanken’ experiments. One of these demonstrate that after a particle passes through the slits it can retroactively alter its previous behaviour at the slits based on manipulating its path eg Wheeler’s delayed choice thought experiment.

However, the ‘double slit intereference’ experiment raises some significant questions. How and why does a wave take on the properties of a particle when it is observed?

There are essentially three common interpretations.

I argue there is a fourth interpretation. That there is a ‘universal observer’ ‘watching’ every single wave function at a quantum level throughout the entire quantum reality and causing a deliberate particulate behaviour where there would otherwise be no particular behaviour if it were unobserved. Since quantum reality is inherently part of the fabric of our material reality, the universal observer thereby ‘creates’ and ‘sustains’ a consistent material universe within which we can exist. It is this universe which we explore and seek to understand scientifically.

But what is the nature of this observation and what is my evidence? My answer is that the ‘universal observer’ cannot be a part of the reality being observed. In other words, the ‘universal observer’ must be separate from the reality being observed in order to observe it. The existence of the ‘universal observer’ therefore, cannot be tested experimentally or scientifically and definitively proven. All that can be seen is evidence of the ‘universal observer’s activity in our material reality (including the quantum reality). An atheistic scientist would argue this is a convenient excuse, yet a believing scientist would find it a tantalising and perhaps convincing possibility to be explored. The only way to get further information is to be given it – the age-long Christian concept of ‘revelation’. At this point, an atheistic scientist would become very unscientific and shut off the possibility of God’s revelation of information which otherwise cannot be known through empiric science. A more reasonable approach is to ask, “Is there any information revealed by such a God which might shed light on this great mystery of quantum physics? Information which my human reason can use to understand my material universe better”. Paradoxically, this is the approach of the traditional open-minded ‘natural philosopher’ of Western civilisation based on classical Greek thought.

Christians believe God reveals the unknowable in the Bible. He inhabits ‘eternity’ outside the reality he sustains (Isaiah 57:15). Does the Bible reveal that God is observing the universe in any convincing manner that sheds light on the mystery of the ‘Double Slit Interference’ experiment?

The Bible argues God created the reality from the immaterial, and that somehow God holds it all together (Colossians 1:15-17), (Hebrews 11:1-3). He created light (Genesis 1:4). From a scientific viewpoint, the speed of light is a universal constant upon which stands our fundamental understanding of physics. Light is as foundational to God’s work of creation as it is in science today (Genesis 1:1-3). But Biblically, it is a constant physical reminder/metaphor for a ‘spiritual’ reality.

The first question is to ask what is God doing as we live our lives? The Bible tells us he is ‘resting’ from his work of creation, and has been doing so since the seventh day of creation, a day which has not yet ended. We are still in that seventh day of rest. Yet clearly while he is resting, God is doing lots of other things. The universe goes on, history goes on. That he is observing the universe is explicitly taught in Scripture. Not only so, but he is observing every location in his universe at the same time (Psalm 33:13, Hebrews 4:13). One of the other things revealed by Scripture is that God detail of the nature of God’s observation. God is ‘measuring’ (Job 38:4-7). ‘Observing’ and ‘measuring’ in many ways are the same thing. When our eye sees something, it cumulates a whole bunch of photon measurements in our retina transmitted and processed in our cerebral cortex and passed up to higher processing centres for conscious thought.

God is more than measuring, he is ‘weighing up’ all sorts of things, and this extends beyond the material measurements of which we are scientifically familiar. His observation and measurement extends into the moral and ethical dimensions, according to standards which he has set and embedded in our very nature as human beings (2 Chronicles 16:9, Zechariah 4:10, Proverbs 15:3, Amos 7:7-8). The Bible reveals God as the great observer, measurer and judge of how things are and how they should be. In other words, the Bible explains why God is measuring or observing the universe. In the ‘Double Slit Interference’ experiment we get a glimpse of just one of the universal mechanisms pertaining to the material universe which he uses to so so.

The Bible reveals yet another element to God’s observation of the universe. If the material universe is sustained in its state by the ‘universal observation’ of God (Hebrews 1:3), what would happen if God stopped observing the universe? I would argue that if my thesis is correct, the material universe would collapse. This is what the Bible reveals will happen one day (2 Peter 3:10-12). It describes a time to come, at the end of this age, when the entire universe will be destroyed and a new one will be created. How does God do this? With the ‘blink of an eye’ (1 Corinthians 15:52).