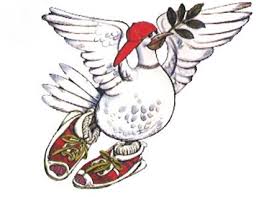 THE MYTH OF THE CHRISTIAN PEACE-MAKER

It is a common view that a mark of a Christian is that they are peace-maker s/peace-keepers. Such people are respected as Christians because they get on with everyone. Their opinion is always reasoned so that it doesn’t challenge unity. They are known as people who don’t put others off-side. The fruits of the spirit are often considered to be the reason for the character of such people.

It seems peace-keepers make the ideal ‘beaurocrats’ from the perspective of Christian Churches, institutions and organizations, because they will serve faithfully regardless of the fortune of the institution they are serving. The problem is that they will serve with compromise if necessary. Such compromise will be different from person to person. It may be simply to ignore injustice that may occur, as in the cases of those in Churches who refused to speak up against paedophilic Church officials. It may be on doctrinal matters. It may be in terms of personal sin. The motives of such people are often interpreted as being pure, seeking the unity of the spirit rather than disorder which is contrary to God’s will. Yet their motives may be very different. They could be motivated by a spirit of tribalism or factionalism. Their self-esteem may be threatened if they fail to be part of the institutional hierarchy. They are often described as humble but their motive may be to seek the self-righteousness of the praises of men compared to those not praised by the institution. The culture they uphold may be a ‘Christian’ subculture of the prevailing world view in their society, rather than an authentic Christian counter-culture that transcends culture and ethnicity.

Many Christians of strong conviction challenge the status quo so they are often perceived as potential troublemakers. When they actually refuse to submit to the status quo they are branded as being too difficult to relate to, or their motives are questioned, or any number of reasons are given regarding their character which allows those interested in maintaining the status quo to ignore them, or suppress them. Such people don’t go with the flow if it is flowing in the wrong direction. Such people don’t conform or keep quiet for the sake of peace. They are not peace-keepers, likely to forsake principles and truth in order to keep everyone happy. Instead they are peace-makers, ready and willing to take the necessary action for truth to prevail. To them, there is no peace if error is present and the honour of the Lord is at stake. Peacemakers often see the peacekeeper who hide from controversy or confusion as betrayers of the Lord, and their stance (or lack of it) to be inconsistent with the indwelling of God’s Spirit.

Jesus says in Matthew 5:9 “Blessed are the peacemakers (eirhnopoioi) for they shall be called sons of God” and immediately goes on to sat “Blessed are those who have been persecuted for the sake of righteousness, for theirs is the kingdom of heaven”. And vv10-11 “Blessed are you when they (people) reproach (insult) you and lying persecute you and say all (kinds) of evil against you on my account. Rejoice and be glad because great is your reward in the heavens, for in the same way they persecuted the prophets before you.” And vv13-16 “You are the salt of the earth; but if the salt has become tasteless, how will it be made salty again? It is good for nothing any more, except to be thrown out and trampled under foot by men. You are the light of the world. A city set on a hill cannot be hidden. Neither do people light a lamp and put it under a bowl. Instead they put it on its stand, and it gives light to everyone in the house. Let your light shine in such a way that they may see your good works , and glorify your Father who is in heaven”.

James 3:13-18. vv17-18 “But the wisdom from above is firstly pure, then peaceable (NIV Peace-loving), forebearing, (adiakritos) without uncertainty (NIV impartial / NASB unwavering), unfeigned (NASB without hypocrisy/NIV sincere). The seed whose fruit is righteousness is sown in peace by those who make peace.”

1 Peter 3:14-16  “But even if you should suffer for the sake of righteousness, you are blessed. And do not fear their intimidation, and do not be troubled, but sanctify Christ as Lord in your hearts, always being ready to make a defense to everyone who asks you to give an account for the hope that is in you, yet with gentleness and respect; and keep a good conscience so that the thing in which you are slandered, those who revile your good behaviour in Christ may be put to shame.”

The world doesn’t want Christian peace-makers, it wants Christian peace-keepers. I recently heard that in Australia, there was an Antidiscrimination Act conviction of two Pentecostal pastors for holding a peace-making view regarding Islamic and secular Australian tradition, not a politically correct ‘peace-keeping’ view.