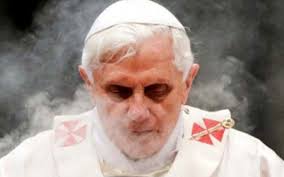 Jews are not to blame for death of Jesus, says Pope in dispute over Bible passage

The Jews are not to blame for the crucifixion and death of Jesus, Pope Benedict XVI said Wednesday. In extracts released from his forthcoming book on Jesus of Nazareth, the Pope completely exonerates the Jewish people of any culpability of the death of Christ. He directly confronts the controversial text of St Matthew’s Gospel in which ‘the Jews’ demand the execution of Jesus and shout to the Roman governor Pontius Pilate: ‘Let his blood be on us and on our children.’ the Daily Mail writes.

The passage has been described even by Catholics as a ‘rallying cry for anti-Semites down the centuries’. But the Pope says the Gospel writer meant the mob in the courtyard and not the Jewish people in general.

As such the crowd was representative of the whole of sinful humanity, he said. Then he explains that the blood of Jesus was not ‘poured out against anyone, it is poured out for many, for all’.

It does not represent ‘a curse, but rather redemption, salvation’, the Pope writes in Jesus of Nazareth – Holy Week: From Entrance into Jerusalem to the Resurrection, to be published next week by the Catholic Truth Society. Although the Bavarian-born Pope is interpreting the New Testament text as one which is not anti-Semitic, his remarks are bound to excite controversy.

The Gospel passage has been used by some Christians down the centuries to depict the Jews as ‘Christ-killers’ who were collectively and inherently guilty of deicide. It was said to be Adolf Hitler’s favourite part of the Oberammergau Passion Play, and it also caused a furious outcry when actor and film director director Mel Gibson tried to include it in his 2004 movie The Passion of the Christ.

Gibson eventually agreed to delete the subtitles while leaving in original Aramaic in the script. Although the Catholic Church in 1965 explicitly rejected the notion of the inherent guilt of the Jews in the death of Christ, some analysts say that in his new book Pope Benedict has gone further than any other Catholic leader in offering a theological position to support good Catholic-Jewish relations.

‘Pope Benedict offers original insights into the death of Jesus and the question of responsibility for it,’ said Sister Margaret Shepherd, secretary of the committee for Catholic-Jewish relations of the Catholic Bishops’ Conference of England and Wales.