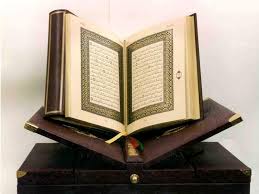 A number of quotes regarding Islam have been submitted over the years to thedebriefing.net

This website is not concerned with promoting or the intricacies of Islam. It looks at the world from a Christian viewpoint.

Quotes from the Holy Qu’ran

God commands justice and doing good and giving to relatives. And He forbids indecency and doing wrong and tyranny. He warns you so that hopefully you will pay heed.
(Qur’an, 16:90)

Endless warfare until Islam reigns supreme in the world

The necessity for an Islamic government (or Caliphate, Theocracy etc) and its interest in conquest

The absolute requirement to submit to this agenda and government

Expediency is to characterise political, economic or other objectives through agreement with non-muslims

The devaluation of non-islamic human life

Instruction to break treaty’ with non-muslims simply on suspicion

The true Muslim will wage war for the cause of God, and help Muslims fight such battles

Reward for sacrfice in war for the domination of Islam

Those who are born Muslims or are culturally muslims have no choice but to submit or face the consequences. Muslims who continue to show friendship to those who choose not to be Muslim are not submitting to God

The prescribed manner of killing

Attitude to Christians and Jews

Coercion of Christians and Jews

“Thousands of Muslims, including Adebolajo, have cited the Koran to justify murder.

Here is a sample from the more than 100 verses in the Koran that call Muslims to violence against the Unbelievers:

”Soon shall We cast terror into the hearts of the Unbelievers …

”And slay them wherever ye find them …”

”As to those who reject faith, I will punish them with terrible agony …”

”Whoso fighteth in the way of Allah, be he slain or be he victorious, on him We shall bestow a vast reward.”

”Slay the idolaters wherever you find them …”

”Fight those who believe not in Allah …”

And so on. So, too, does the body of jurisprudence which accompanies the Koran, the Hadiths, bristle with calls to jihad: ”I have been made victorious with terror …”

”And jihad will be performed continuously …”

”Kill any Jew who falls under your power.”

”Fight everyone in the way of Allah and kill those who disbelieve in Allah.”

So many Muslims have been encouraged to murder civilians by such exhortations that the rate of violent incidents perpetrated in the name of Islam is staggering, a toll that shows no sign of subsiding. The website thereligionofpeace.com, which maintains a record of terrorist acts committed in the name of Islam, has logged an astounding 20,939 terrorist acts committed in the name of Islam since the attacks of September 11, 2001. Thereligionofpeace.com keeps a monthly list of bloody incidents and during the past 30 days it records 222 incidents, in 25 different countries, including much of the Arab world and North Africa, and Britain, France, Russia, Nigeria, Thailand, the Philippines and China. (Apologists for Muslim violence claim that thereligionofpeace.com does not provide sources for its lists and thus has no credibility, which is nonsense as every incident is based on credible published reports.)

Seventy per cent of these 222 incidents in the past month took place in four countries – Iraq, Pakistan, Afghanistan and Syria – all battlefields in the ancient religious civil war between Sunni and Shiite Muslims, a civil war more violent now than it has been for decades.

The existence of this violent sectarian schism, and the systemic repression of religious dissent throughout the Muslim world, demolish the absurd claim that Islam is ”a religion of peace”.

Most Muslims are peaceful, like most non-Muslims, but the Koran groans under the weight of its own contradictions, with entreaties to kindness co-existing with exhortations to merciless war. If the Koran were only a text of peace and mercy, tens of thousands of Muslims could not invoke its verses to engage in violence. Those who gravitate to the wrathful messages of the Koran bring their own pathologies with them, which they then cloak in zealous piety. Apologists argue that those who use the Koran to justify violence are not Islamic. And in the West there is fearfulness to trigger the belligerent victimology that extreme Muslims use to cloak intransigence, separatism and special-pleading.

The most disturbing aspect of the record of violence of Muslims invoking the name of Islam in violence is that the public record understates, not overstates, the problem. Not included in the log of violent crimes are the outbreaks of civil violence such as the riots that have rocked Stockholm over the past week, where an urban underclass of predominantly Muslim immigrants, refugees and asylum-seekers and their children has erupted in violence, vandalism and attacks on police. You will not find the word ”Muslim” in media reports.”

an article by Paul Sheehan

Book Review : The Legacy of Jihad    This is an excellent scholarly book written by an Associate Professor of Medicine