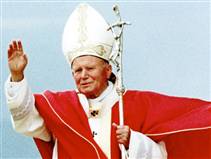 There is no doubt in my mind that Pope John Paul II was a great man. He is arguably one of the greatest men of the 20th century, and I suspect that under his guidance the Roman Catholic Church avoided schism and unprecedented decline. His mixture of conservatism, steadfast opposition to communism in Poland, and willingness to unite not just Roman Catholic factions, but also to tone down sectarianism, and to establish dialogue with other religions, has probably helped to reduce antagonism to Roman Catholicism throughout the world. Much like the Americans regarding their foreign policy, Roman Catholics find it hard to understand why people might dislike their religion. The institution of the Papacy has led to division of the Catholic Church into Roman and Eastern Orthodox Churches. It has led to a great deal of suffering in history of many peoples throughout history, both Christ-confessing and non-Christian people.  To his credit, Pope John Paul tried to deal with some of these abuses throughout history, by calling Jews “elder-brothers”, and by calling muslims “brothers”. On March 2000 he delivered a sweeping apology, repenting for the errors of the Roman Catholic Church over the previous 2,000 years. In 1986 he had visited a Synagogue in Jerusalem. In 1993, he established full diplomatic ties with Israel. In 1998, he apologised for Catholics who failed to help Jews persecuted by the Nazis. At the very least, he seemed to undermine the claims of exclusivity of the Roman Catholic Church as the one true Church, while at the same time maintaining this as doctrine.

Karol Wojtyja was the first non-Italian Pope in 455 years. He adopted the Papal name Pope John Paul II, and did many things during his 26 year reign.  He nominated 483 saints, held more than 1,100 general audiences at the Vatican, issued 14 encyclicals on moral, religious and social issues, and traveled extensively throughout the world. In fact, he traveled the equivalent of 30 times the circumference of the earth, making more than 100 foreign trips and spending more than three years away from the Vatican. In 1989, he met with Soviet President Mikhail Gorbachev seeking to re-establish the influence of the Roman Catholic Church throughout the Eastern Bloc. In 1998 he visited Cuba and mixed criticism of the US embargo on Cuba with his well known opposition to communism. On television images at the time, he seemed to overlook the near worship of the revolutionary hero Ernesto “Che” Guevara by Roman Catholics in Cuba as they worshipped God. It prompted me to consider whether another saint was to be nominated. In 1983, he even modelled reconciliation by courageously forgiving and meeting with Mehmet Ali Agca in prison, the man serving a life sentence in Rome for attempting to assassinate him.

My intent in this paper is to make a very simple observation. Was Pope John Paul II a man of peace? On the surface he seemed to seek reconciliation between people and in my view was quite effective in convincing world leaders that he was a man of peace. Most Western societies see reducing conflict between people as the way to achieve unity between people. In this sense Pope John Paul II probably was a man who brought a degree of unity to parts of the world who were historically aggrieved and in conflict. Most Western societies probably are developing ‘unity’ as an absolute value in what is otherwise a plethora of conflicting value systems. This is probably because it facilitates democracy and commerce. It is often to be achieved by tolerance, even if it is simply a superficial unity as has historically occurred in many parts of the world where Christians, Jews, Muslims, Hindus etc have co-existed for centuries. From my perspective, it is hard to argue against a degree of tolerance of differences that allows people to co-exist, particularly if this tolerance is characterised by freedom, non-violence and is not exploitative or overtly oppressive of one group in favor of another. Unfortunately, history does not put  the Roman Catholic Papacy as a force for such co-existence, tolerance and freedom. Yet John Paul II appeared to be a peacemaker.

The Bible has an interesting comment to make about peacemakers. It says that a peacemaker is “wise and understanding”  that the peacemaker’s  wisdom is “humble and gentle” (James 3:13). A peacemaker doesn’t “harbor bitter envy, or selfish ambition, doesn’t boast about his/her wisdom over the truth” (James 3:14). The wisdom of a peacemaker is “from above” (God) and is contrast to “earthly, natural wisdom” which is ultimately “demonic” (James 3:15)  because it leads to “jealousy, selfish ambition, disorder and worthless practises” (James 3:16). In other words, human reason and emotion, if not modulated with absolute truth from God is easily manipulated so that humans believe the conclusions of their their own wisdom is superior to that of God’s. In the end such wisdom facilitates power, greed, exploitation, injustice and suffering.  Therefore, a peacemaker, though “peaceable, considerate, compliant and merciful“, is “impartial, unwavering regarding the truth, and is sincere (unfeigned)” in these things (James 3:17). This is a key feature of the “good life” (James 3:13) and “righteousness” before God, which “sows the seed of peace” in the world by those who “make peace” (James 3:18).

Unfortunately, the effect of the papacy in history has often been the accumulation of power and wealth by the Roman Catholic Church’s clergy and the facilitation of oppression, injustice and suffering. Pope John Paul II is the 264th successor of the apostle Peter, who was according to Roman Catholic doctrine, the first Pope. This has been used to justify an an argument that certain utterances by the Pope are to be considered infallible. These are accepted without question by most Roman Catholics and enforced by the clerical institution and zealous lay people. These utterances are added to Holy Tradition and become the basis of practise and doctrine in the Roman Catholic Church. Yet most non-Catholics around the world see enormous deviations and inconsistencies of this Tradition with the Bible. Is that the biblical sign of peacemaking? Who’s truth are we to believe – that of Roman Catholic Tradition or that of the Bible. Many Christians have chosen the Bible because the Bible itself argues that “all Scripture is God-breathed and is useful for teaching, rebuking correcting and training in righteousness” (1 Timothy 3:16-17). The Bible says that “no prophecy of Scripture has come about by the prophets own interpretation”, but that the prophecy of “prophets” in Scripture has been under “the guidance of the Holy Spirit” (God) (2 Peter 1:20). They refuse to add new utterances to the Bible which states almost at its very end “anyone who adds” or “takes away from the prophecy of this book” is cursed (Revelation 22:18-19). Jesus taught, for example on divorce or on disobedience to the interpretation of religious leaders regarding obedience to God’s law, that to find the real meaning of Scripture one needs to look to Scripture, not human reason or traditions. Yet the Papacy with its Roman Catholic Traditions has effectively “boasted about (their) wisdom over the truth”(James 3:14) and placed themselves in the place of God in determining truth. Wisdom from below has supplanted wisdom from above repeatedly in the institution of the Papacy of the Roman Catholic Church. Therefore, peacemaking efforts of Pope John Paul II never went far enough. He really needed to destroy this practise, and to reject Holy Tradition, by submission to “truth from above” which rests on “God’s power” (1 Corinthians 2:4), and to “hold unswervingly” (James 3:17) to it to really bring peace to a fragmented Christianity, and a broken world in need of God.

The death of Pope John Paul II is a very sad thing. It is sad for many reasons, but no more tragic than a child who starves, a young adult who dies in a car accident, or a once vibrant elderly person who gets some terrible chronic disease, such as severe dementia, and eventually dies. It is no more tragic than having a bomb destroy someone’s life, whether ‘legally’ in war or ‘illegally’ in a terrorist action or other crime. I have watched the grief of Roman Catholics poured out from all over the world. But they have grieved for their spiritual “Father“, the “Shepherd” of their Church. Politically correct commentators and politicians have spoken of the “Holy Father” and eulogised his demise and his greatness as a peacemaker. Yet nothing has convinced me more than this that the Papacy is an offense to God, regardless of John Paul II’s sincerity. In the Bible, the words “Holy Father” are uttered once by Jesus when praying to God the Father. Jesus teaches “do not call anyone on earth your (spiritual) father” (Matthew 23:9). The Scriptures teach that “there is only one mediator between God and man – the (resurrected) Lord Jesus” (1 Timothy 2:5). According to Roman Catholic Holy Tradition, the pope and the panoply of saints are the mediators between God and man. It is justified by the argument that the Lord Jesus, who is God, is just too remote and unsympathetic, even though we are told in the Bible that Jesus “is able to help those who are tempted because he himself suffered when he was tempted” (Hebrews 2:18) and therefore “able to sympathise with our weaknesses” (Hebrews 4:15). According to this Holy Tradition, the Pope is said to be God’s “Shepherd” over Gods Church. Yet the Scripture teaches clearly that the resurrected Lord Jesus is the shepherd over God’s people (John 10:14,16; Hebrews 13:20, 1 Peter 5:4; Revelation 7:17). In fact, the true shepherd of God’s people has always been God himself (Genesis 48:15, 49:24; Ps 23:1, 28:9, 80:1). Sadly, I heard one cardinal, on the almost continuous coverage by CNN of Roman Catholic mourning for the pope, say that “until the next Pope is elected the Church is without a Shepherd”. It all leads to my conclusion that regardless of John Paul II’s efforts as a peacemaker, the institution who he represented has put itself in God’s place. Did he seek to destroy that idol? No, he didn’t. Did he seek to replace the Holy Tradition (from below) with the true wisdom of the Bible (God’s truth from above). No he didn’t? Did he have the power? Yes he did! The Scripture concludes that all of this is demonic in origin. We are told of “the man of lawlessness” (2 Thessalonians 2:3). We are told he will be “revealed” because “he will exalt himself above every so-called god or object of worship, so that he takes his seat in the temple of God (the Church), displaying himself as being God” (2 Thessalonians 2:4). Did John Paul II fit this description. I don’t think so because I’m not convinced he put himself in the place of God. But it can reasonably be argued that the institution of the Papacy does!