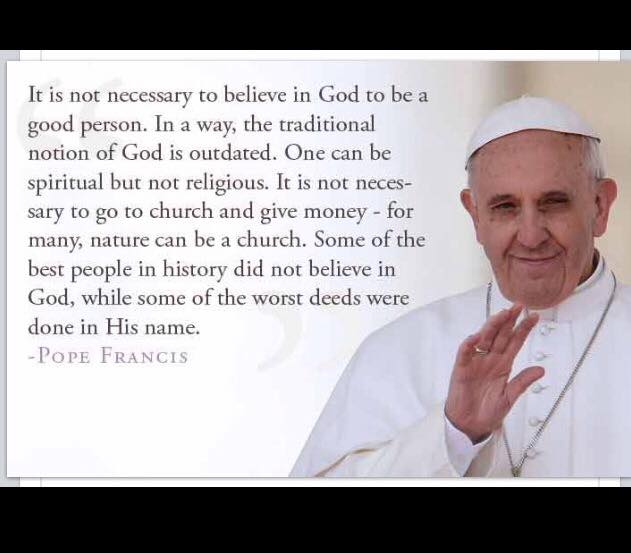 This was posted on a facebook page. It purportedly reflects the view of Pope Francis in 2015. Whether it truly reflects Roman Catholic doctrine is uncertain. However, the viewpoint is not Christian.

The Bible’s premise is that the invisible, mysterious and unknowable God almighty has revealed His existence in His Creation (the universe and everything in it). Though he graciously continue to provide biological life to most humans, failure to acknowledge this by the majority of humanity renders them objects of his anger, not his affection and love.

“The wrath of God is being revealed from heaven against all the godlessness and wickedness of people, who suppress the truth by their wickedness, 19 since what may be known about God is plain to them, because God has made it plain to them. 20 For since the creation of the world God’s invisible qualities—his eternal power and divine nature—have been clearly seen, being understood from what has been made, so that people are without excuse. 21 For although they knew God, they neither glorified him as God nor gave thanks to him, but their thinking became futile and their foolish hearts were darkened.” Romans 1:18-21

God’s response to this is alarmingly serious. He simply lets people do the best they can out of the lives they have, engrossed as much or as little in their acts of rebellion against God as they wish. During life they accumulate a history, and ultimately when biological life ends, humanity ‘meet their maker’ because humans are not simply biological organisms – they are spiritual beings. At that time, there is no negotiation, no-one to plead their case – God simply passes judgement on their ‘goodness’ according to God’s standards and not humanity’s.

5 But because of your stubbornness and your unrepentant heart, you are storing up wrath against yourself for the day of God’s wrath, when his righteous judgment will be revealed. 6 God “will repay each person according to what they have done.”  Romans 2:5-6

This is whether people are religious or not.

Though the view about not having to go to Church expressed in the alleged quotation is correct, nature is not a church. The church is an assembly of God’s people. Church is God’s people getting together in His name, wherever that occurs. People who don’t acknowledge the God of the Bible cannot expect the God of the Bible to acknowledge their ‘goodness’. No-one is good, only God. Though there are degrees of goodness amongst people, everyone falls short, no matter how ‘saintly’.

God is driven by a steadfast love and compassion regarding rebellious humanity. Yet he is perfectly just and must condemn rebellious individuals. Humanity understands the concept of a judge in a court. A court either justifies someone or not depending on whether it finds them guilty of breaking the law. It’s no different with God, except all humans are found guilty, regardless of their ‘good’ works, religous or secular. All humans are in the same boat – no-one can boast.

In what ways is the quotation correct or incorrect?

“The fool says in his heart, “There is no God.” Actually, he is corrupt, is deeds are vile; there is no one who does good.” Psalm 14:1

The Bible ultimately is saying that no-one but God is good. There is no such thing as a ‘good person’ – there are simply degrees of rebellion, with no-one good enough to be a ‘good person’ in the ‘eyes’ of God. Without God ‘good’ is a relative human concept that varies amongst populations ; Spartans might think it good to expose imperfect children, or a husband might think it good to beat his wife, or interacial marriages are wrong, or a surrendering in war is dishonourable and prisoners who surrender should be executed, or if a starving person steals a loaf of bread they should be hanged or transported to Botany Bay, or a non-muslim who refuses to convert to Islam should be humiliated or beheaded etc etc. Ultimately, the existence of ‘goodness’ is ephemeral and subject to human failings, if there is no God to define ‘good’. So ‘acknowledging’ God and understanding ‘good’ is fundamental to defining ‘good’.

Pope Francis is probably referring to ‘religious’ as ‘institutionalised’ spirituality – like the Roman Catholic Church. The Bible states everyone is ‘spiritual’, some just don’t acknowledge it. Most ‘spiritual’ people are actually ‘religious’ whether they are part of ‘institutionalised’ religion or not. That is because being ‘religious’ is about doing ‘good’ things to get a spiritual benefit – like following religious rules/laws, increasing your ‘karma’, storing up merit. It is not necessary to believe in God to be ‘religious’. In the secular West, conforming to ‘political correctness’ can be an expression of secular religion in the same way.

In particular, “Some of the best people in history did not believe in God, while some of the worst deeds were done in his name.”

I suspect people have compiled this quotation and put it on facebook because it comforts them. The comfort logically derives from a ‘psychological maneuver’ which links ‘goodness’ to ‘hope’, that if God really does exist, they will be acceptable to Him, because they believe they are ‘good’ people.

Yet, their ‘heads are in the sand’.

It is hopeless for them. God is their enemy.

“3 All of us also lived among them at one time, gratifying the cravings of our flesh and following its desires and thoughts. Like the rest, we were by nature deserving of wrath“. Ephesians 2:3

This ‘pyschological maneuver’ is part of our defense mechanisms against our ‘deep’ knowledge, embedded in us as spiritual beings, that we are doomed. Not only are we doomed to die biologically, but God makes sure we die spiritually too for eternity.

I suspect that if whoever first compiled this quotation actually sat down with Pope Francis he would have more to say.

I would hope he would say the following :

4″ But because of his great love for us, God, who is rich in mercy, 5 made us alive with Christ even when we were dead in transgressions—it is by grace you have been saved. 6 And God raised us up with Christ and seated us with him in the heavenly realms in Christ Jesus, 7 in order that in the coming ages he might show the incomparable riches of his grace, expressed in his kindness to us in Christ Jesus. 8 For it is by grace you have been saved,through faith—and this is not from yourselves, it is the gift of God— 9 not by works, so that no one can boast. 10 For we are God’s handiwork, created in Christ Jesus to do good works, which God prepared in advance for us to do” Ephesians 2:4-10

“all are justified freely by his grace through the redemption that came by Christ Jesus. 25 God presented Christ as a sacrifice of atonement,[i]through the shedding of his blood—to be received by faith. He did this to demonstrate his righteousness, because in his forbearance he had left the sins committed beforehand unpunished— 26 he did it to demonstrate his righteousness at the present time, so as to be just and the one who justifies those who have faith in Jesus” Romans 3:24-26.

Or this about the uselessness of being ‘religious’ to be ‘good’. Take out the Jewish religion and add any other, including Roman Catholicism or Islam or Buddism, Hinduism etc :

“11 Therefore, remember that formerly you who are Gentiles by birth and called “uncircumcised” by those who call themselves “the circumcision” (which is done in the body by human hands)— 12 remember that at that time you were separate from Christ, excluded from citizenship in Israel and foreigners to the covenants of the promise, without hope and without God in the world. 13 But now in Christ Jesus you who once were far away have been brought near by the blood of Christ.

14 For he himself is our peace, who has made the two groups one and has destroyed the barrier, the dividing wall of hostility, 15 by setting aside in his flesh the law with its commands and regulations. His purpose was to create in himself one new humanity out of the two, thus making peace, 16 and in one body to reconcile both of them to God through the cross, by which he put to death their hostility. 17 He came and preached peace to you who were far away and peace to those who were near. 18 For through him we both have access to the Father by one Spirit.

19 Consequently, you are no longer foreigners and strangers, but fellow citizenswith God’s people and also members of his household, 20 built on the foundationof the apostles and prophets, with Christ Jesus himself as the chief cornerstone. 21 In him the whole building is joined together and rises to become a holy temple in the Lord. 22 And in him you too are being built together to become a dwelling in which God lives by his Spirit”. Ephesians 2:11-22

That is, there is no hope, unless there is faith. This faith has content. That content is Jesus – who he is, what he has done and what he will do.

I would hope that if you took Pope Francis aside, and spoke to him outside of his political role he would repeat what the Apostle Peter said “Salvation is found in no one else, for there isno other name under heaven given to mankind by which we must be saved.” Acts 4:12 But I won’t hold my breath.