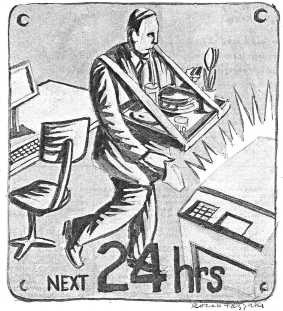 The Workaholic nation : Published in an Australian newspaper in 2011, it is not unreasonable to see such behaviour as more than a reflection of ‘culture’. It is an ideology that serves the business elites in Australia, and goes beyond the workplace in the way people live their lives and the way Australians ‘judge’ one another – using work as religion.

An excerpt (below) was sent in to the debriefing.net in 2011

It’s the respectable addiction – a perverse pride in toiling for long hours and sleeping for far too few.

‘Toughen up, princesses.” That was the now infamous response from a Jetstar captain to pilots’ complaints about long shifts and night flights. ”You aren’t fatigued, you are tired and can’t be bothered going to work.”

Jetstar bosses dismissed the email, leaked to a Senate committee hearing in March, as banter between colleagues. But harmless jesting or not, the ”banter” tapped into a powerful undercurrent in modern life: the lionisation of long work hours and scepticism towards those who do not jump on board the work train with gusto.

Do you take a certain pride in working yourself to the bone? Leave your comments below

In a recent book, Wilful Blindness, the author and businesswoman Margaret Heffernan bemoans society’s adoration of overwork. Heffernan, who has first-hand experience of corporate life in the US and Britain, writes: ”The allure of exhaustion is baffling. I’ve lost count of the number of corporations I’ve worked with which positively boast about the number of all-nighters they pull.”

You don’t have to look far (sometimes just in the mirror) to see evidence of our devotion to overwork – whether it is the lawyer who always eats dinner al desko, the investment banker who keeps a week’s worth of suits in the office or the political adviser who has not had a Saturday off since Christmas 2006.

Hard work is central to Australian identity. We might joke about sickies and ”avagoodweegend” but Australia was built off the back of a sheep, mythologised in protracted, sleep-deprived battles and modernised in back-breaking projects like the Harbour Bridge and Snowy Hydro Scheme. Some of our favourite cultural icons draw upon working hard – be they Hard Yakka shorts, the ”hard-earned thirst” of a VB or Jimmy Barnes’s working class man ”working hard to make a living”.

When Julia Gillard first addressed the nation as our surprise new Prime Minister she talked of ”hard work” above all else. Working in Kevin Rudd’s office was so intense that the former prime minister said you could measure it in dog years. No wonder he had time for only three hours’ sleep a night.

Even though we complain about the drain long hours place on everything not related to work, there is a fair bit of pride mixed in as well – a sort of overworked machismo. ”There is a kind of heroic cloak that some people are really proud to don,” says Professor Barbara Pocock, director of the Centre for Work + Life at the University of South Australia.

A similar attitude can be observed when it comes to under-sleep. As Professor Drew Dawson, a sleep researcher at the University of South Australia, observed in Crikey, those who say they need little sleep – such as Margaret Thatcher, Bill Gates and Rudd – are perceived to be top performers. ”Short sleepers are typically considered to be more dynamic, more likely to succeed and more likely to be higher performing individuals,” Dawson says. ”Nothing could be further from the truth.”

As Heffernan notes, ”sleep deprivation starts to starve the brain”. She cites Charles Czeisler, a professor of sleep medicine at Harvard Medical School, who is stunned by work cultures that glorify sleeplessness. ”We now know … that 24 hours without sleep or a week of sleeping four or five hours a night induces an impairment equivalent to a blood alcohol level of 0.1 per cent. We would never say, ”This person is a great worker – he’s drunk all the time.” Yet we continue to celebrate people who sacrifice sleep.”

Some of the great stuff-ups in recent history have involved sleep deprivation: Chernobyl, the Exxon Valdez oil spill, the Challenger disaster. And courtesy of those gruesome RTA ads, we know that fatigue is a big cause of road accidents. Research also shows that lack of sleep increases the chances of obesity (you get the munchies), diabetes and cardiovascular disease. Pulling an all-nighter might initially lead to euphoria but it then makes us prone to risky behaviour and bad decisions.

The concept that your work is not your life has been kicking around the public consciousness for decades. ”Work-life balance” entered the lexicon in the 1960s. ”Burnout” followed in the ’70s, and by the ’80s we were worried about karoshi (Japanese for death by overwork). And that’s not even including well-worn terms like ”stress”, ”time-poor” and ”workaholic”.

As the US author Thomas Geoghegan argues in his recent book Were You Born on the Wrong Continent?, overwork is a false friend, with diminishing returns. Damningly, Germans work fewer hours than their US counterparts but have higher productivity and a greater quality of life.

Yet none of this has changed the game. We work longer and longer hours and don’t take holidays. The 2010 report on the Australian Work and Life Index, or AWALI, said more than 25 per cent of the 2000 Australians surveyed worked more than 48 hours a week. Most of those surveyed said work had a negative effect on the rest of their life, including their relationships and ability to contribute to friends and community. All generations – X, Y or boomer – expressed a desire to work 35 hours a week. Those surveyed also reported they would even rather an extra two-week holiday each year than a pay rise.

Confusingly, however, Australians are great stockpilers of leave. About 60 per cent of us are hoarding our holidays like squirrels building up a pile of chestnuts they will never eat. In 2009 Australians had about 123 million days of accrued annual leave, prompting the Australian Tourism campaign ”No leave, no life” to encourage workers to take a holiday (and spend some tourist dollars domestically).

On top of all this, a significant proportion of employees are not getting enough sleep. An AWALI-related survey of 950 South Australian workers last year found that fatigue was common in the workforce. More than 30 per cent of those surveyed frequently felt fatigued, and 28.5 per cent reported they rarely had at least seven hours’ sleep per night (the amount health experts recommend). Thirty-nine per cent reported that work ”frequently” or ”sometimes” caused them to have less sleep than they needed.

Limiting work and getting the recommended seven hours is easier said than done. The workplace has changed in the past 30 years. Technological developments mean that work follows us home, to the dining table and even to bed. But we cannot fall back on the technology excuse all the time. Computers and mobile phones are no longer so newfangled. We all recognise an out-of office or a voicemail message. We are familiar with the off button, too.

Pocock notes that recessions in the late 1980s and early ’90s and the more recent global financial crisis mean workers were laid off and not rehired, so workplaces are now chronically understaffed. ”There is a material reality to overwork,” Pocock says, which also includes a sense of obligation and an intensification of work. ”People do more,” she says. Many industries today rely on unpaid overtime, while casualisation of the workforce, and weakened unions, means workers are not as secure in their jobs or as outspoken about their rights.

As devotees of Mad Men and The Office know only too well, managers set the tone of a workplace. If they value face time and long hours at the office, it is more than brave to stick your head above the work-life parapet. ”There are very powerful cultures about what a ‘normal job’ is in many workplaces,” Pocock says.

The culture of overwork has some powerful, historical roots as well. In her book Willing Slaves, the British journalist Madeleine Bunting examines the industrial revolution in the late 18th and early 19th centuries, when independent agricultural workers were moved into urban factories. Bunting argues two main methods were used for prodding workers: God and hunger.

The Methodists preached from the pulpit that God wanted you to work hard – it was your religious duty to slave. In addition, wages were kept so low that people lived hand to mouth and depended on steady work for survival. In the 21st century, Bunting suggests,two new prods have taken hold. One is ”branding”, which companies use to create a sense of cohesion and purpose in overwork. This is seen in everything from chirpy corporate slogans and merchandise to office-mandated leisure activities. The second prod is consumerism. We work hard to earn as much money as we can, so we can buy as much stuff as possible. Hand-to-mouth has been replaced by hand-to-designer-couch.

But working hard also gets us at a more personal level, too. ”Average” is the dirtiest of insults in the modern workplace. It’s no longer OK just to keep up with the Joneses – we are expected to push and flog ourselves in the hope we might be exceptional. As Malcolm Gladwell argues with his ”10,000 hour rule” in Outliers: the Story of Success, true greatness involves a lot of time.

The virtue of under-sleep is similarly buried deep in our psyches. Dawson notes that since the rise of Protestantism in the 16th century ”sleep has been considered an appetite behaviour like food and sex”. Today celibacy and fasting don’t hold the same cachet, but depriving ourselves of sleep is still a way to prove our ”goodness”. Indeed, every Olympic medal haul tells us that sporting glory is associated with brutally early mornings. And every hollow-eyed new mum or dad will assure you that dedicated parenting starts with sleep deprivation.

Perhaps there is also a residual glamour from youth – when staying up very late was at first contraband (the aim of all sleepover parties), then a sign of hardcore studying or partying. In the Urban Dictionary ”pulling an all-nighter” is also associated with terms like ”dancing”, ”cramming”, ”party”, ”crazy” and ”f—”. That is, a feat of endurance, hedonism, good fortune, or all three.

Someone who eats so much or so little that they are endangering their health will earn our concern and sometimes our scorn. The same goes for excessive drinking, drug-taking or speeding – particularly when it starts to threaten the well-being of others. And yet ”workaholism”, as the clinical psychologist Barbara Killinger once wrote, ”is the respectable addiction”.

Powerful factors compete with our commonsense when it comes to our attitudes to work and rest. We know what is good for us – science and the Germans prove it. But even though we might be exhausted, grumpy, doing a substandard job at the office and an even less impressive one at home – it is still preferable to be a tough princess instead