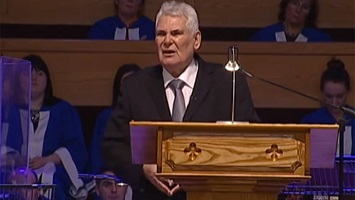 Reported by the official Russian news outlet on 18 June 2015

A Northern Irish evangelical preacher could face prosecution after he referred to Islam as “Satanic” and a “heathen” religion.

Pastor James McConnell came under fire after delivering a sermon at his Belfast church in June 2014 in which he claimed he did not trust any Muslims.

It has now been confirmed by the Northern Ireland’s Public Prosecution Service (PPS) that he will face prosecution after he refused to accept a lesser punishment.

A spokeswoman for the PPS said: “I can confirm that following consideration of a complaint in relation to an internet broadcast of a sermon in May 2014, a decision was taken to offer an individual an informed warning for an offence contrary to the Communications Act 2003.”

“That offence was one of sending, or causing to be sent, by means of a public electronic communications network, a message or other matter that was grossly offensive.

“The offer of an informed warning was refused by the defendant and accordingly the matter is now proceeding by way of a summary prosecution in the magistrates’ court.”

Speaking at the time, McConnell said he “had no intention of causing any offence or insulting any member of the Muslim community,” nor any plans to “arouse fear or stir up or incite hatred.”

“My sermon was drawing attention to how many followers of Islam have, regrettably, interpreted the doctrine of Islam as justification for violence,” McConnell said.

“I have qualified my comments by reference to those who use their religion as justification for violence. As a preacher of the word of God, it is this interpretation of the doctrine of Islam which I am condemning.

“I abhor violence and condemn anyone, of any faith, who uses religion to justify it,” he added.

But during his sermon he is reported to have said “a new evil had arisen,” adding “there are cells of Muslims right throughout Britain.”

“Islam is heathen, Islam is satanic, Islam is a doctrine spawned in hell,” McConnell said.

Police were asked to investigate McConnell for an alleged hate crime and Northern Ireland’s First Minister Peter Robinson was forced to issue a public apology for initially defending the cleric.

Robinson previously caused controversy when he said he would not trust Muslims in a spiritual capacity, but he would allow them to “go down the shops” for him.