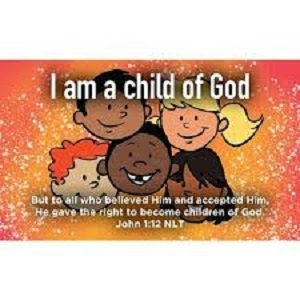 Are we all Children of God?

In 2020 the Roman Catholic Pope Francis declared that homosexuals needed to be ‘legally covered’ through a ‘civil union law’ in the documentary “Francesco” 1. The Pope’s argument appeared to be derived from a convoluted theology founded on all people being ‘children of God’. The Vatican subsequently declared no change to Roman Catholic doctrine 2. It is likely to please non-Christians that Pope Francis argued that all people are ‘children of God’ and ingratiate the Papacy to those amongst the atheistic elites who wish to normalise the homosexual lifestyle and see Christianity as an enemy. The positive implication that if all people are children of God, God has the same relationship with all people, regardless of their allegiance to Him or not, is understandably appealing to non-Christians. But it is a myth, an obfuscation, a deceit. Moreover, I argue that Christians should disengage from any justification of the misanthropic ‘morality’ of the world in which they live. Instead, we need to ask the question ourselves – ‘are we all children of God?‘.  To avoid potential avoid misdirection based on partisan theology the answer should be sought in the Bible.

Christians should disengage from any justification of the misanthropic ‘morality’ of the world in which they live .

The term ‘children of God’

Though the term is frequently used in Christian Churches, it is also used by numerous religious sects 3. Some of these  sects base their terminology on the Bible, and some use the term to abuse their adherents. Ironically cults which abuse or exploit the sexuality of adherents are common 4.

‘Climate activists5‘ also employ the term 6. It seems to me that such cases Christian theology is appropriated to to validate what is predominantly a secular religion. Swami Vivekananda uses the term to describe his followers7.

Examples of non-Christian non-religious use include :

Nevertheless, it seems to me that the most common use is probably as a Christian concept denoting divine filiation when one becomes a child of God as opposed to not being a child of God.

Biblical Use of the term ‘children of God’

The fundamental Biblical concept is that ultimately only God knows who are His, 2 Timothy 2:19 “the Lord knows them that are his”. So logically there are those who are not His. The essential flow of the Bible is one held together by God’s plan of salvation of His people, who are His by redemption through the blood and resurrection of Jesus Christ. The nation of Israel are His true people. But the nation of Israel are not the ethnic politicosocial or religious group from whom descend modern Jews. Though chosen as His possession (Deuteronomy 7:6 ; Deuteronomy 32:8), the ancient ethnic politicosocial religious group are disinherited for their betrayal of the Lord (Hosea 1:9). Throughout their history God had warned them this would occur (Numbers 14:12).

The true people of God (who have a filial relationship with God as his ‘children’) are described as a ‘new‘ Israel (Romans 11:1-28). The new Israel described in the Bible  includes people from all nations, as well as descendants from ethnic Israel who will join them (Romans 11:24) by following the Messiah, Jesus whom gentiles call the Christ.

‘Offspring’ of God ‘by creation’

The argument that God created all things is fundamental to the Biblical world-view. This includes all people who are therefore products of His creative work (Acts 17:25). But people are different to the rest of creation. We are made in His image (Genesis 1:26-27).  And we belong to God – “All souls [people] are mine; as the soul of the father, so also the soul of the son is mine: the soul that sins, it shall die” (Ezekiel 18:4). The apostle Paul used this argument amongst the philosophers in the Aeropagus of Athens  when he declared his agreement with the Hellenic poets that “we are also his offspring” (Acts 17:28). Nevertheless, such a generic description concerning the origin of humanity does not mean a direct father-child relationship between the Creator God and people. The Greek words used simply describe likeness as of kind (γενος εσμεν). That is, we are in His image. Indeed, the fact that people are God’s image-bearers makes them not only special (Psalm 8:5) but also subject to judgement for corrupt expression of the image (Genesis 9:4-6 ; James 3:9). A filial relationship with the Father as His children does not follow.

So it is dubious to equate being ‘offspring’ of God with being ‘children’ of God in any positive sense.

Though created ‘offspring’ of God, human beings as a whole lose any implied ‘child-father’ status when disinherited by God and handed over to lesser Gods (elohim18) (Deuteronomy 32:8) at the Tower of Babel (Genesis 11:1-9)19. This event is fatal for the proposition that being ‘offspring’ of God meant we are ‘children of God’. It is not valid from a Biblical perspective to call all people children of God.

all people are not children of God

Though created ‘offspring of God’, human beings as a whole lose any ‘child-father’ status when disinherited by God and handed over to lesser Gods (elohim) (Deuteronomy 32:8) at the Tower of Babel (Genesis 11:1-9). This event is fatal for the proposal that being ‘offspring’ of God meant we are ‘children of God’.

Yet the division of all people into two groups is not accidental. It has been on view in Scripture almost from the beginning when God declared to Adam and Eve that as a consequence of their rebellion there will be implacable enmity and warfare between the offspring of the serpent and humanity, Genesis 3:15. Though perhaps the serpent’s offspring could be interpreted as rebellious spiritual beings who followed the serpent, subsequent scripture includes people too. Jesus explicitly states that the Pharisees are children of the devil, not of God, John 8:44. Other verses describe the differences between the children of God and the human children of the devil 1 John 3:10, 1 John 3:8, Acts 13:10, 1 John 3:4-10, Revelation 21:8, 1 John 2:15-17, 2 Corinthians 4:4, Romans 6:23, John 8:42, John 3:16-17, Matthew 25:41, Ephesians 2:3, John 6:70, 1 John 3:1-24, Hebrews 2:14, John 3:8, Revelation 3:9, Revelation 12:17 and 1 John 3:2. Essentially, the differences are in terms of behaviour, allegiance to God through belief in His Son Jesus, and outcome.

To enter a filial relationship with God as our Father, and we as His Sons and Daughters requires God to do something special in us. He must re-create us (2 Corinthians 5:17) so that we are reborn. John 3:3 “Jesus replied, “Very truly I tell you, no one can see the kingdom of God unless they are born again”. This is a special work of God which does not occur in all people (even though they bear His image). Jesus reiterates it to Nicodemus the chief theologian of Israel because it is hard to understand. John 3:7-8 “You should not be surprised at my saying, ‘You must be born again.’  The wind blows wherever it pleases. You hear its sound, but you cannot tell where it comes from or where it is going. So it is with everyone born of the Spirit.”

This rebirth recreates us as God’s children within His family. He becomes our Father and we his sons and daughters, that is, His children, Galatians 3:26-29  “So in Christ Jesus you are all children of God through faith, 27 for all of you who were baptized into Christ have clothed yourselves with Christ. 28 There is neither Jew nor Gentile, neither slave nor free, nor is there male and female, for you are all one in Christ Jesus. 29 If you belong to Christ, then you are Abraham’s seed, and heirs according to the promise.”  There are different words in the original Greek language to describe this Father-child relationship. It is the same one for human families. We are called  ‘υιοι θεου‘  (sons of God)  or ‘τεκνα θεου’ (using the genitive, or possessive form, in Greek grammar in relation to God) or simply but less commonly ‘παιδια‘ (Hebrews 2:14) and ‘σπερματος‘ (‘seed‘ – Revelation 12:17). And this is different to ‘likeness of kind’ translated as ‘offspring’ ‘γενος εσμεν‘.

It is also important to note that it is in this way that we become descendants of Abraham. This is why the new Israel is Israel, not the ancient  ethnic culturopolitical and religious nation of Israel, Romans 9:6 “not all Israel is Israel“. All Abrahamic faiths can only inherit the promises to Abraham through Jesus, not through law, nor through religious observance.

So, the Bible states clearly that only those who receive and believe in the name of Jesus have the right to become children of God. John 1:12-13  Yet to all who did receive him, to those who believed in his name, he gave the right to become children of God—  children born not of natural descent, nor of human decision or a husband’s will, but born of God.” The Roman Catholic Pope was wrong. Not everyone is a child of God.

One of many myths, but one of the chief ones

In their attempt to ingratiate themselves with an increasingly hostile many Churches today teach falsehood. Among many falsehoods are the following three are probably the chief ones :

Expression and Privilege of being a child of God

Being a child of God is fundamentally expressed differently by the children of God and those who simply bear His likeness.

The joy and peace of moving from an existence where we should fear God to one where we simply love Him is expressed as a proud implacable allegiance to His Son Jesus and a desire to honour Him in our lives. The eternal security He offers us means we are liberated from many doubts and crises that logically eventually become existential unless we sedate ourselves from the reality of our existence20.

Though it can be argued that we are all God’s offspring because He created all people, the clear teaching of Scripture is that not all people relate to God as their heavenly father in any credible way, and therefore they are not His children. To be God’s children requires a special work of God to recreate us. Also described as being reborn, it is expressed in one exclusive way – to receive Jesus as Lord and Saviour by believing in Him.

The argument that ‘all people are children of God’ is inconsistent with the use of the term in the Bible in which the concept is developed to apply exclusively to believers John 1:12-13.

Feel free to add your comments after the footnotes.