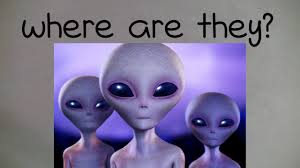 Fermi’s Paradox Blog is prompted by the following article :

Fermi’s Paradox : Biogenesis, Abiogenesis and Design & The Origin of Life on Earth

James you are a naughty boy.

Naturalism attempts to explain the existence of intelligent life in our cosmos by several well-trodden paths that include:
* Chance can be overcome and made probable if not almost certain by the almost infinite probabilistic resources of a multiverse.
* Necessity. The anthropic principle has been co-opted to fulfil this role. The RNA world is another example.
* Panspermia is an implicit affirmation that the chance of abiogenesis is so extremely improbable (in this region of the cosmos) that it may have arisen elsewhere.

Ultimately naturalism seeks an explanation that invariably invokes not just one but often several mechanisms to account for life in our cosmos. Unfortunately for advocates of the multiverse and panspermia, these explanations only push the envelope of causation back one step but they are not ultimate realities that exist necessarily. The necessity of natural processes must be taken by naturalists as brute fact. That’s the way the world is without further explanation or qualification. In other words, according to naturalism there is no explanation for why the world has the properties it does. But none of these explanations in isolation or together are presently adequate, so the topic is viewed with much awe, fascination and mystery. The theist is no less awed and fascinated by the grandeur of the cosmos but the explanation is not perplexingly mysterious.

Cosmology is a rich trove whose infinite treasures of knowledge are there to be mined. The answer is out there according to naturalists, it’s just a matter of time before scientists make that eureka finding and finally consign God to the grave. This is a very revealing window into the mindset of naturalists who would prefer to avoid the alternative prospect of a deity (especially theism) as a fate worse than death. After all a deity who holds men eternally accountable for the choices they make will significantly impact on one’s personal lifestyle preferences. There is a lot at stake here – people’s personal and professional reputations, their livelihoods, the status and authority the former endows them with are not to be ignored lightly.